Does Earth have a Second Moon?

We all know and love the moon. We’re so assured that we only have one that we don’t even give it a specific name. It is the brightest object in the night sky, and amateur astronomers take great delight in mapping its craters and seas. To date, it is the only other heavenly body with human footprints. What you might not know is that the moon is not the Earth’s only natural satellite.

Duncan Forgan, a research fellow at the University of St. Andrews, recently wrote about one such object called 3753 Cruithne, where he’s calling it a “second moon.”

Here’s the best picture we have of this tiny, rocky “moon” that’s only about 3 miles across. Because of its small size, astronomers need powerful instruments to see Cruithne. The telescope at Powell Observatory took the image below, where it only shows up as a tiny speck of light. 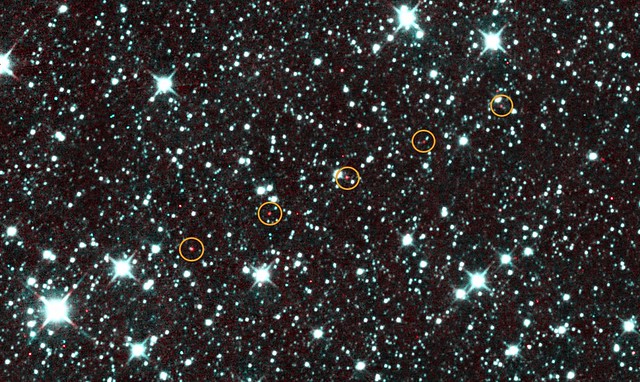 Cruithne is technically not a moon but a quasi-orbital satellite of Earth. Duncan Forgan explains over at The Conversation:

“This simply means that Cruithne doesn’t loop around the Earth in a nice ellipse in the same way as the moon, or indeed the artificial satellites we loft into orbit. Instead, Cruithne scuttles around the inner solar system in what’s called a “horseshoe” orbit.”

“To help understand why it’s called a horseshoe orbit, let’s imagine we’re looking down at the solar system, rotating at the same rate as the Earth goes round the sun. From our viewpoint, the Earth looks stationary. A body on a simple horseshoe orbit around the Earth moves toward it, then turns round and moves away. Once it’s moved so far away it’s approaching Earth from the other side, it turns around and moves away again.”

Here’s a video of the wacky loops that Cruithne’s orbit traces in that imagining:

Horseshoe orbits are actually quite common for moons in the solar system. Saturn has a couple of moons in this configuration, for instance.

What’s unique about Cruithne is how it wobbles and sways along its horseshoe. If you look at Cruithne’s motion in the solar system, it makes a messy ring around Earth’s orbit, swinging so wide that it comes into the neighbourhood of both Venus and Mars. Cruithne orbits the sun about once a year, but it takes nearly 800 years to complete this messy ring shape around the Earth’s orbit.

Cruithne might not be around forever: “Cruithne is expected to undergo a rather close encounter with Venus in about 8,000 years, however. There’s a good chance that that will put paid to our erstwhile spare moon, flinging it out of harm’s way, and out of the Terran family.”