Our universe is becoming more mysterious with the attempts of understanding it deeply. The Galaxies are moving away from each other because of expanding universe which is now well accepted concept.

Now, the astronomers have also observed that the galaxy clusters are constantly moving towards a point present in southern constellation Centaurus and Hydra.

The source of this attraction is doubted to be present outside our observable universe. The astronomers have no idea what is causing this mysterious motion of galaxy clusters, they are just calling it “Dark Flow”. 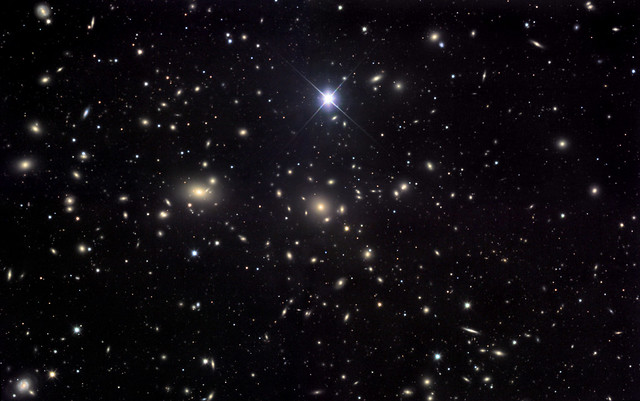 The Coma Galaxy Cluster, also known as Abell 1656, is more than 300 million light-years away and is named for its parent constellation, Coma Berenices. It appears to participate in the dark flow.
Credit: Jim Misti (Misti Mountain Observatory)

The research led by Alexander Kashlinsky at NASA’s Goddard Space Flight Center in Greenbelt, Md., is based on the study of motion of large galaxy clusters which are present at very large distances ranging from hundred million light years to 6 billion light years.

Evidences indicate that the galaxy clusters are heading outward with the tremendous velocity of 2 million mph along the line joining the Earth and the constellation Hydra. This motion is independent of the expansion of universe.

The direction of motion is still not certain, outward motion cannot be neglected. “We detect motion along this axis, but right now our data cannot state as strongly as we’d like whether the clusters are coming or going,” Kashlinsky said.

The Dark Flow is mysterious because present distribution of mass in our universe do not account for this, it indicates presence of some external source outside our universe influencing and sweeping matter from our vicinity.

These shocking results were obtained in study of Cosmic Microwave Background (CMB) radiation which is believed to be emitted 380,000 years after the formation of the universe. CMB is prevailed the whole universe, the study of fluctuations due to interaction between CMB and galaxy cluster provides information about the motion of galaxy clusters.

The X-ray emitting hot gases of galaxy cluster scatters the photons of the CMB which results in the decrease in the temperature of CMB in the direction of galaxy. This is called kinematic Sunyaev-Zel’dovich (KSZ) effect. The dipoles in CMB change in such a way that it indicates the motion of individual cluster. The measurement of wavelength of scattered photon can be used to calculate the speed and direction of motion of cluster.

The shift in temperature of CMB due to one cluster is negligible and cannot be detected easily. In 2000, Kashlinsky along with Fernando Atrio-Barandela at the University of Salamanca, Spain showed that the noise from the signals can be removed if they study large number of galaxy clusters. 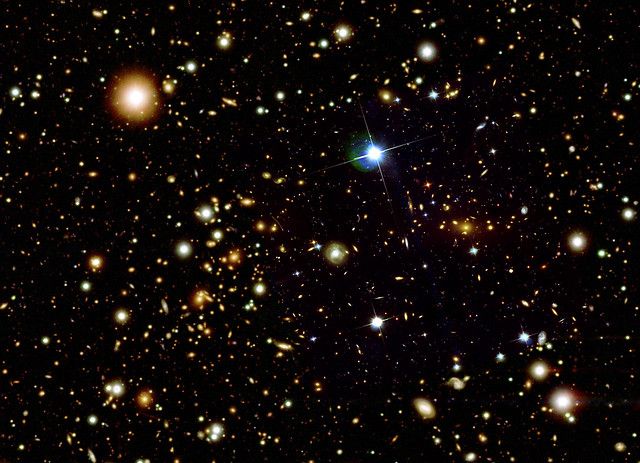 The galaxy cluster 1E 0657-56 (known as the Bullet Cluster) lies 3.8 billion light-years away. It’s one of hundreds that appear to be carried along by a mysterious cosmic flow.
Credit: NASA/STScI/Magellan/U.Arizona/D.Clowe et al.

In 2008, the research had studied about catalogue of about 700 galaxy clusters in the method as suggested above and the this mysterious motion of galaxy clusters were noticed first time after the 3 years of measurement with NASA’s Wilkinson Microwave Anisotropy Probe (WMAP).

After this, more galaxy clusters were observed for two more years with WMAP whose result made it more firm that this Dark flow in not just statistical fluke. 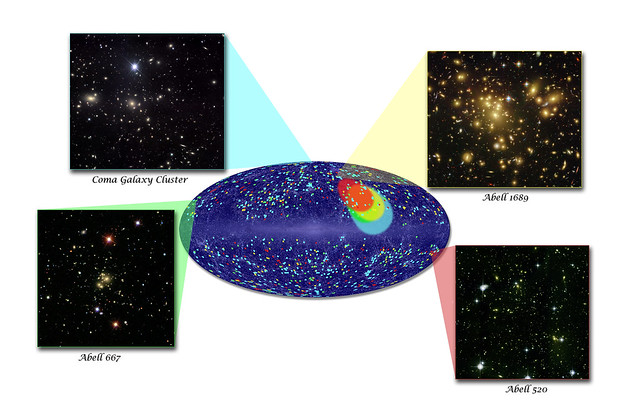 The colored dots are clusters within one of four distance ranges, with redder colors indicating greater distance. Colored ellipses show the direction of bulk motion for the clusters of the corresponding color. Images of representative galaxy clusters in each distance slice are also shown.
Credit: NASA/Goddard/A. Kashlinsky, et al.

According to Kashlinsky, the universe may be in the form of bubble along with other bubbles which are formed after the big-bang. Our universe is expanding within this bubble and the large object may be present in the other bubble influencing the motion of galaxy clusters independent of expansion of universe.

In other words you can say a sibling universe is pulling content of universe outward. The researchers are planning to perform the study on more galaxy clusters and go deeper into space.