Dark matter is one of science’s great mysteries. It makes up an enormous amount matter in the universe, it is invisible, and it does not correspond to anything in the realm of our experience. Different theories compete for an explanation, but so far none of them has prevailed.

Now, an international team of astronomers led by Dr David Harvey of the Observatory of Sauverny in Switzerland and the University of Edinburgh, UK, has studied how elusive dark matter behaves when clusters of galaxies collide.

Researchers carried out the new survey focusing on 72 galactic cluster collisions from all angles and at different times during their collisions. The researchers used the Hubble telescope to map the distribution of stars and dark matter after a collision. They also used the Chandra observatory to detect the X-ray emission from colliding gas clouds.

“Dark matter is an enigma we have long sought to unravel,” said John Grunsfeld, assistant administrator of NASA’s Science Mission Directorate in Washington. “With the combined capabilities of these great observatories, both in extended mission, we are ever closer to understanding this cosmic phenomenon.”

Galaxy clusters are made up of “galaxies, gas clouds, and dark matter,” and during galactic collisions the gas clouds slow down or stop altogether.

“We know how gas and stars react to these cosmic crashes and where they emerge from the wreckage. Comparing how dark matter behaves can help us to narrow down what it actually is,” said Harvey. 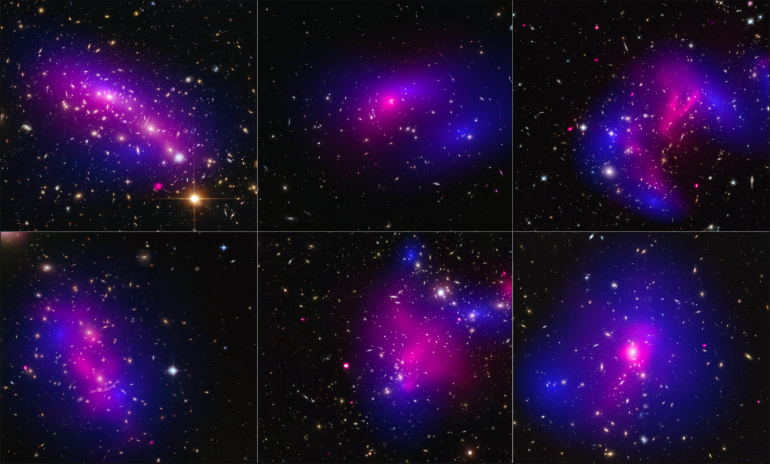 Dark matter’s presence is known only by its interactions with normal matter through gravity. It does not, however, interact via the electromagnetic force, which is why we cannot directly see it – it does not emit, scatter or reflect light – it is more “invisible” than “dark.”

Back to the survey, it shows that dark matter is less likely affected by these collisions and isn’t even slowing down. This leads to the idea that dark matter doesn’t totally interact with visible particles surrounding it, which was the previous theory. If dark matter were to collide into other dark matter during the collision, the movement of the galaxies could have shifted significantly.

This result helped researchers realize just how invisible the stuff is, even to itself.

“A previous study had seen similar behavior in the Bullet Cluster,” said co-investigator Richard Massey of Durham University in the UK. “But it’s difficult to interpret what you’re seeing if you have just one example. Each collision takes hundreds of millions of years, so in a human lifetime we only get to see one freeze-frame from a single camera angle. Now that we have studied so many more collisions, we can start to piece together the full movie and better understand what is going on.”

Anyway, “there are still several viable candidates for dark matter, so the game is not over. But we are getting nearer to an answer,” Harvey said. “These astronomically large particle colliders are finally letting us glimpse the dark world all around us, but just out of reach.”