The system in question, dubbed PSR B1259-63/LS 2883 – or B1259 for short, is an eclipsing binary star system located 7,500 light-years away from us in the constellation Crux, contains a pulsar — a highly magnetized, rotating neutron star that emit a focused beam of electromagnetic radiation, a dead relics of a more massive star — and its mate a blue supergiant star SS 2883 about 30 times as massive as the Sun.

The pulsar emits very high energy gamma rays as it spins 20 times a second and it moves in an eccentric orbit leading to a 40-day eclipse each time the pulsar passes behind its companion star. When the pulsar collide with the stellar’ disk, the rapid rotation and strong magnetic field of it generate a strong wind of high-energy material fragments moving away at the speed of about 4 million miles per hour from the pulsar.

These two objects are in an unusual cosmic arrangement and have given us a chance to witness something special,

As the pulsar moved through the disk, it appears that it punched a clump of material out and flung it away into space.

After this clump of stellar material was knocked out, the pulsar’s wind appears to have accelerated it, almost as if it had a rocket attached, 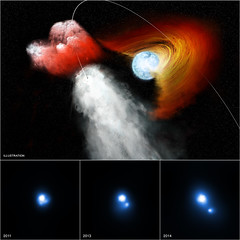 Artist’ illustration of a pulsar jettisoned away the clump of stellar material from a massive star in the binary system B1259. ©NASA/CXC/PSU/G.Pavlov et al. Click to zoom

This just shows how powerful the wind blasting off a pulsar can be,

The pulsar’s wind is so strong that it could ultimately eviscerate the entire disk around its companion star over time.